Plan your itinerary to arrive in Rundu no later than 17:00 today. Accommodation options in the Rundu area are limited, we would therefore suggest Kaisosi River Lodge.

Meet Jakkals and fellow travellers at the lodge. There will be a briefing of what to expect over the next couple of days followed by dinner. (dinner included in tour costs).

Please remember to keep your headlights on when driving in Namibia. (day or night).

Early morning departure for the Katwitwi border post. After crossing the border, the route heads north along the western banks of the Cubango River towards Menonque. Driving will be slow going as there are potholes and the tarmac is not in good condition. The road may be a nightmare but at the same time it is Africa an experience on its own. The drive will take us past the construction camp of the former Springbok Rugby Captain Garry Teichmann's construction camp. If we travel well we will sleep on the banks of the Cubango river. 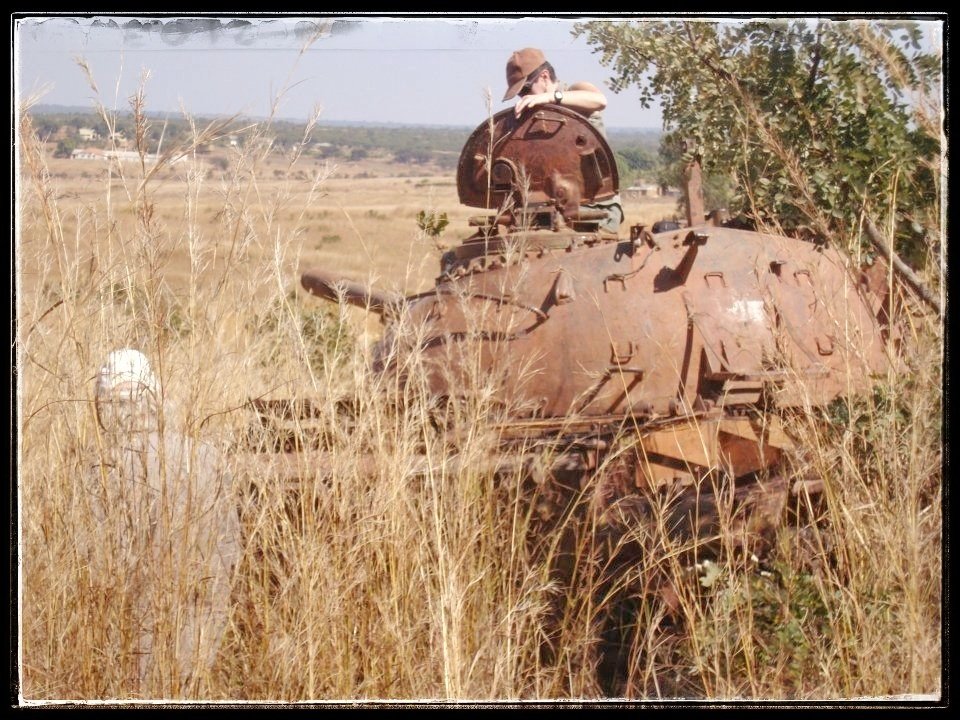 The second part of the road towards Menonque can still be challenging, but after a while we reach a tarred road and the driving should be smooth towards Menonque. In Menonque you can see the remnants of the buildings that were affected by the war. Here we should be able to refuel if there is fuel available. A Short drive outside Menonque we will settle for the evening.

Today is a long day passing through the city of Huambo, which is the second largest city in Angola and was formerly known as Nova Lisboa. Our heading is Waku Kongo, leading us through a mountain pass.

We are making our way into the old coffee plantations route today. We will travel through the fields where thousands previously worked for minimum wage before Independence. Coffee is one of Angola’s most important agricultural products. Prior to independence in 1975, coffee production in Angola reached about 230 000 tons per year, making Angola the fourth largest coffee-producing nation in the world. We wonder deep into the forest on an old two spoor track. 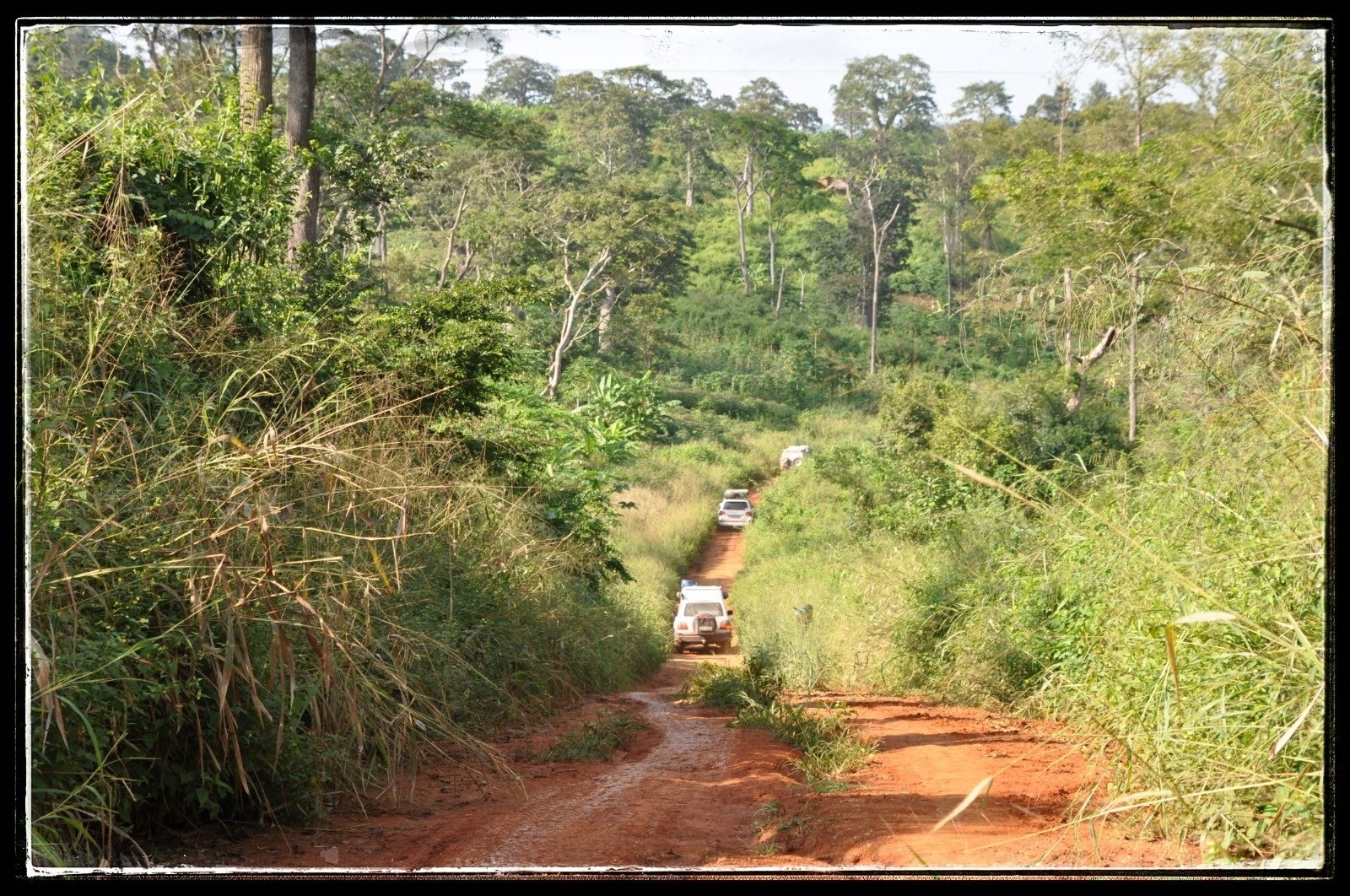 The colossal blocks of stone that make up Pungo Andongo (Pedras Negra), cover a rectangular area of about 12km x 6km and many of them rise 200m above the surrounding flat savanna.

Geologically, the rocks are a mystery: they are hard sedimentary conglomerates but are out of character with the surrounding topography. The growth of moss and algae cause them to change color during the season. Sundowners goes down well here. 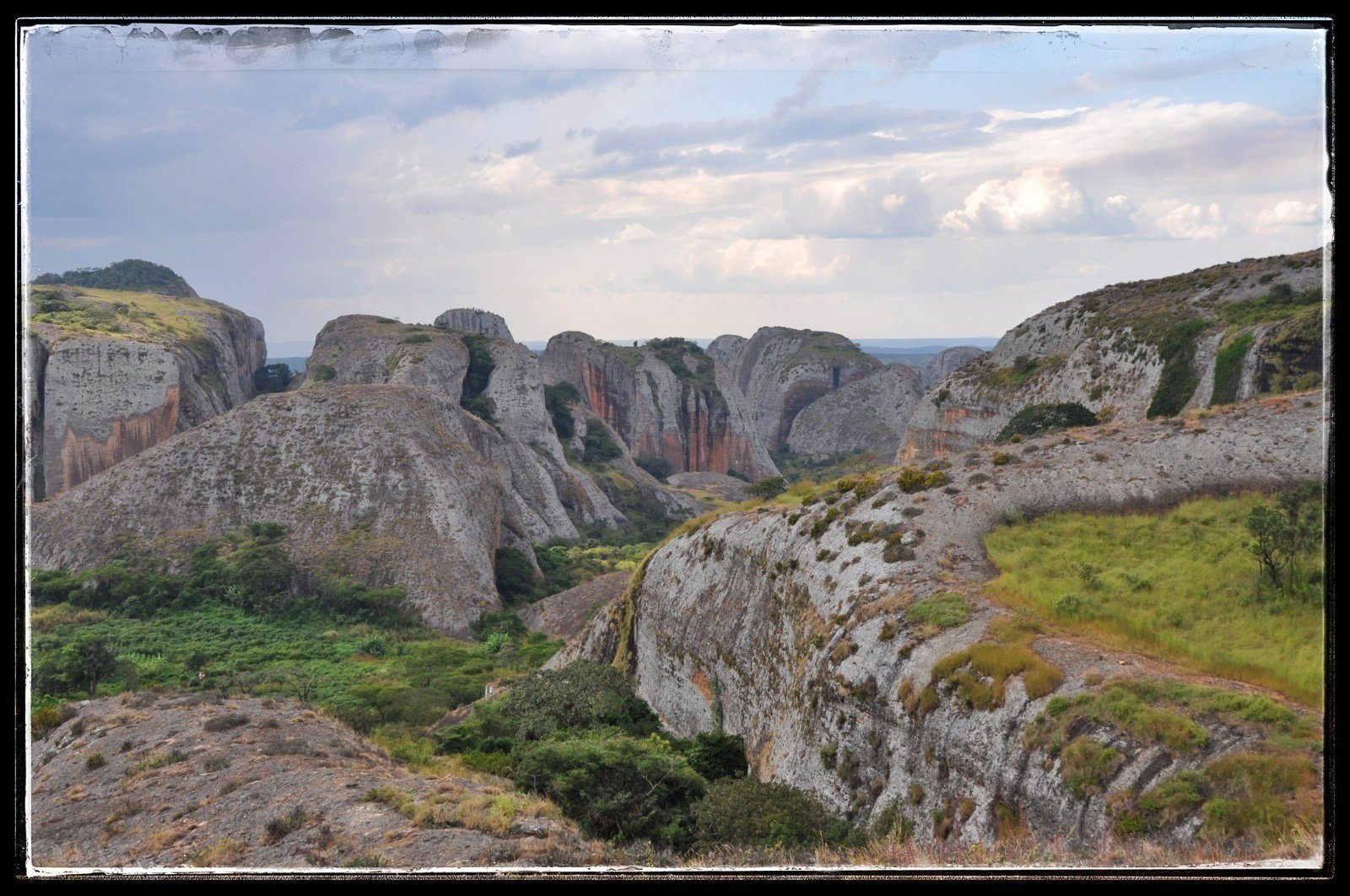 The provincial capital and province share the name of Milange. The province sits on the central plateau in the north of Angola, shares its borders with the Democratic Republic of Congo.

Depending on which source you check, the waterfalls on the river Lucala at Kalandula are either the second or third tallest in Africa. Irrespective of its ranking, at 105m high and about 400m wide they are spectacular and well worth the effort to visit them. 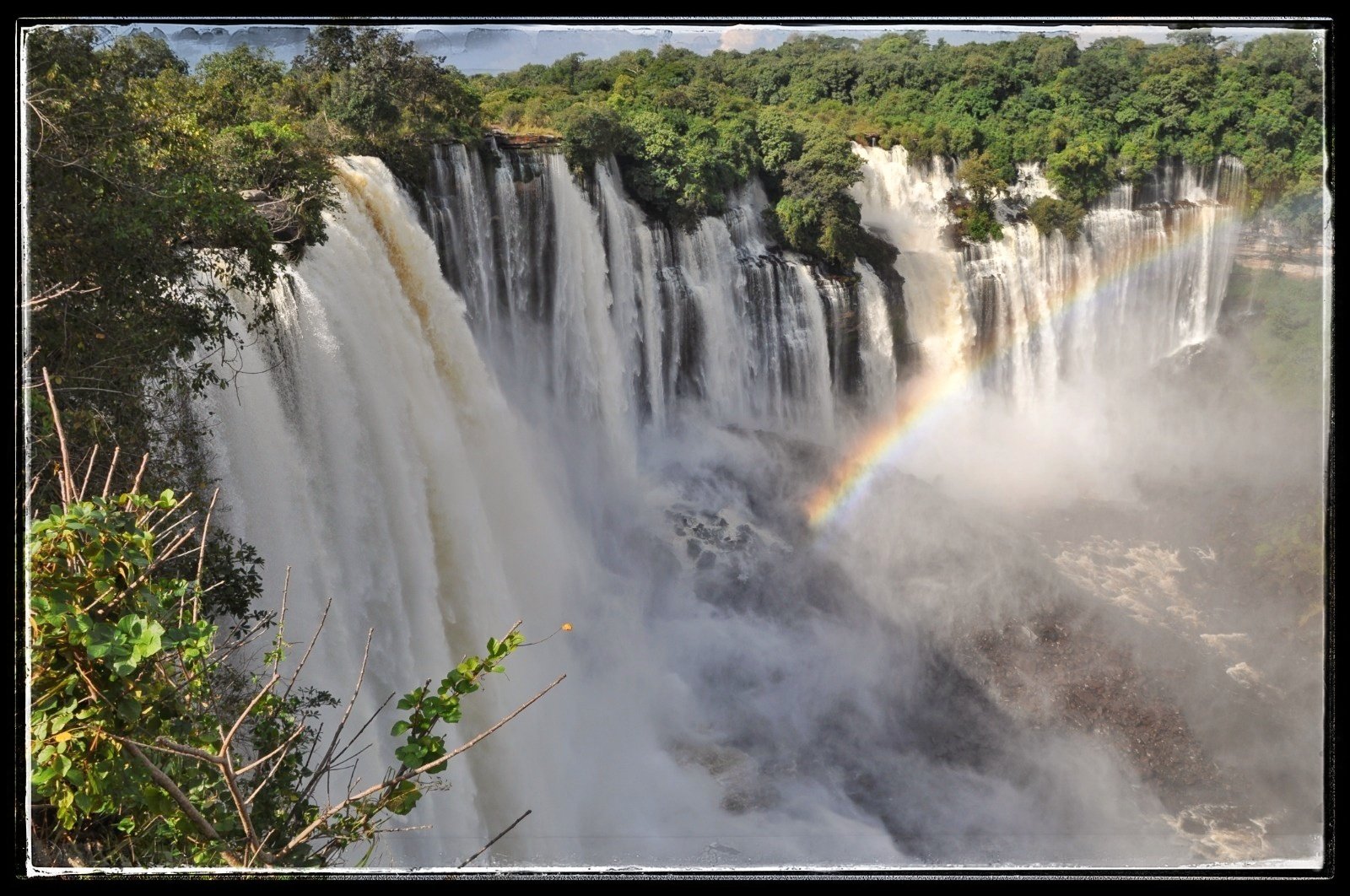 We make our way to Luanda. We will take the infamous Ring Road just before the city. The road is called this due to the fact it makes a ring around the busy capital. Today will be a long day that will take concentration. The scenery is spectacular with dense forest around us. The open street markets make for quite an interesting visit. We pass by a botanical garden on our way. Our camp will be at a village called Barra do Dande, a village that was known for its fishing. 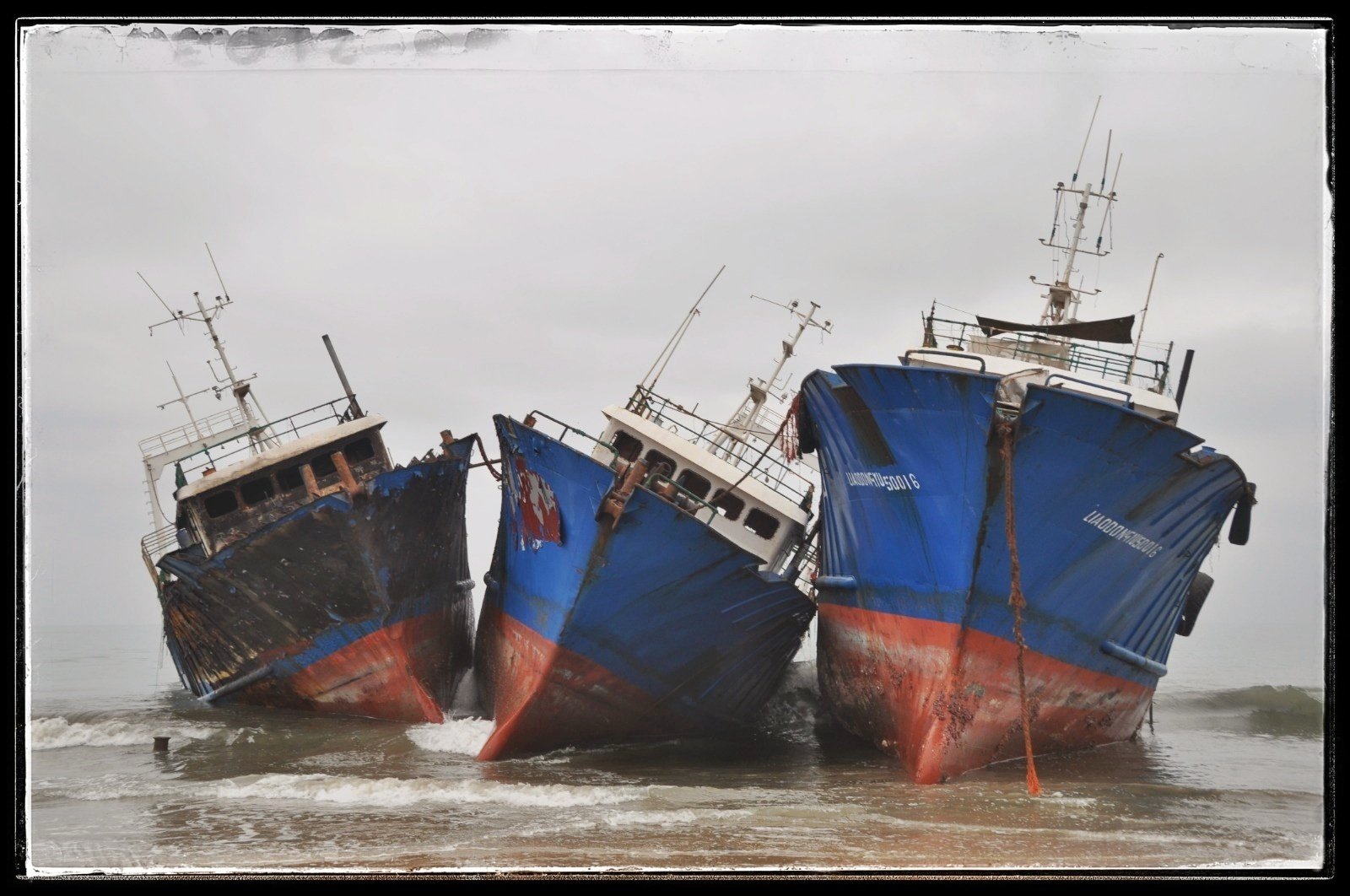 Turning south, (this is our turning point), we head into Luanda for a drive through the “big Apple”. We stop over at a very large shopping center to stock up for the remainder of the trip.

Luanda is a fast and sprawling city that is difficult for visitors to get to grips with. It’s a busy place and the gap between rich and poor gapping. Nobody knows but the estimate population is five million, while others suggest it could be as high as eight million, making it one of the most populated cities in Africa.

O/N Kwanza Lodge based on DBB, Excluding drinks and activities. 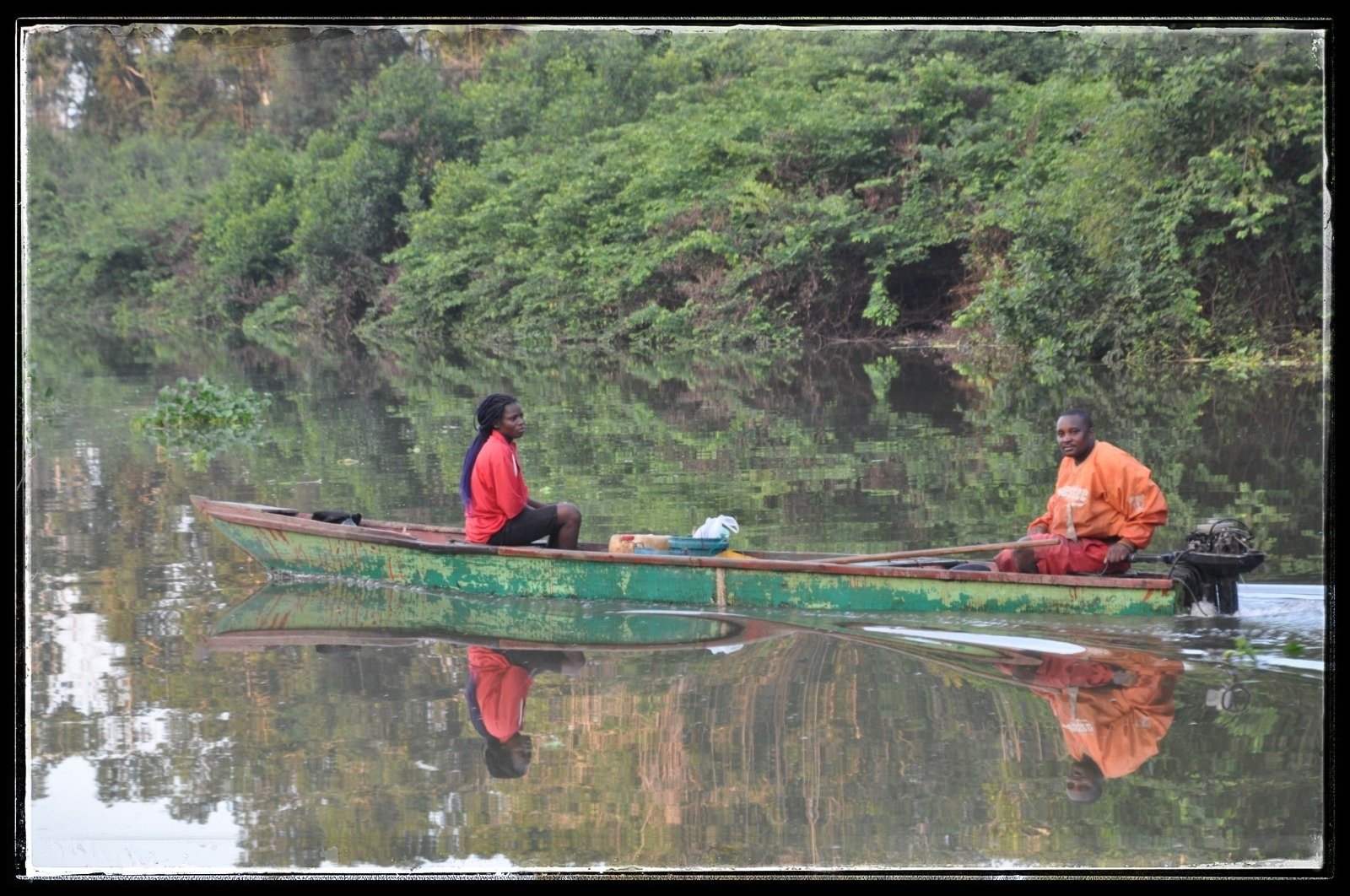 Working our way south via Sumbe, crossing the Keve River, we reach the Kumbira Forest. Kumbira Forest is under government protection and serves as an educational example to the locals of how to live in harmony with the forest and not to destroy it. This is a must see. We will set up camp high on top of a mountain. The scenery on this day is spectacular. 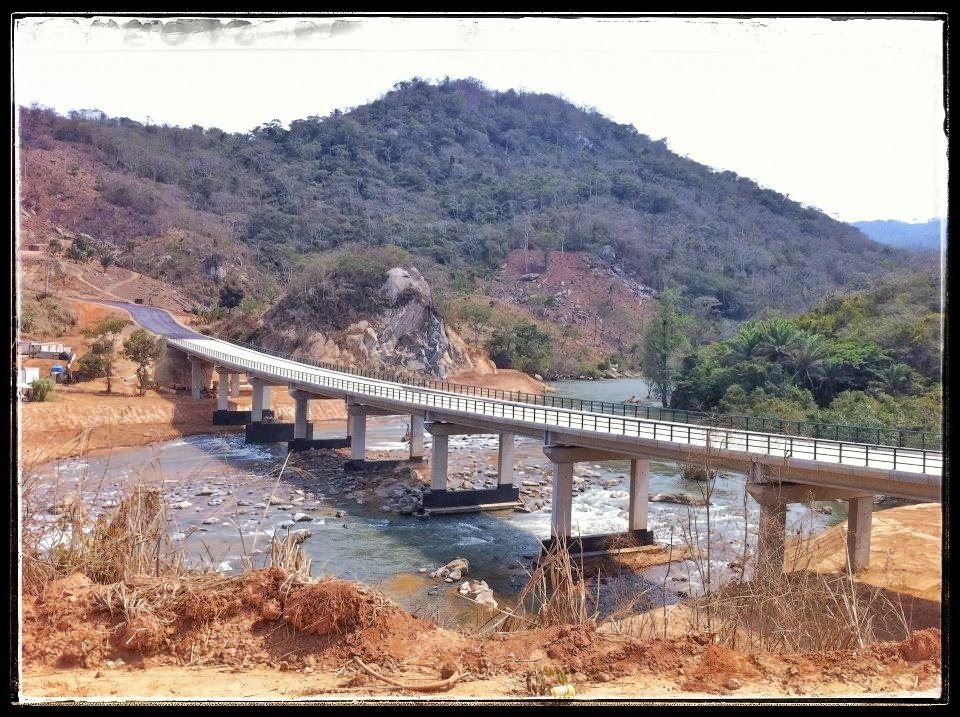 From Seles we travel to Lobito which dates to 1905 and owe its existence to the bay of the same name, having been chosen as the sea terminus of the Benguela Railway to the far interior. Lobito is a very modern part of Angola with accommodation, many ships and oil rigs at the harbor. The peninsula with its nightlife and variety of small restaurants makes it ideal for a stopover. Here you will get a chance to relax on the beach and enjoy the atmosphere. Nice and early stop.

O/N Camping:   Beach camping at Zulu Camp (This might change due to availability at the time).

Included: Breakfast – dinner is for your own account and will be enjoyed at the restaurant on the beach. Here you can experience a variety of Portuguese dishes in various restaurants. 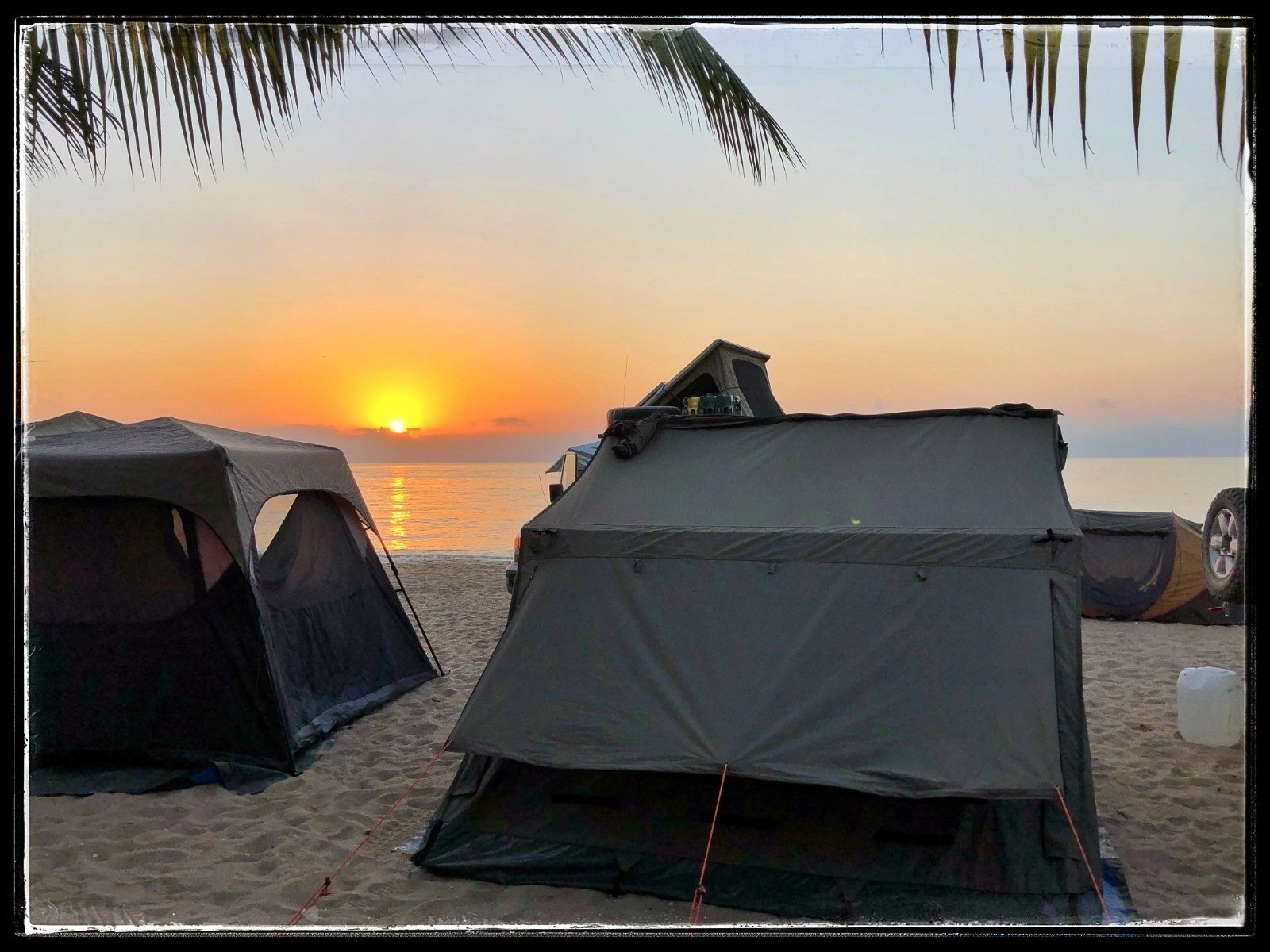 We are heading back into the Namib Desert; the area is bare and open. A very well constructed road ends just like that, making way further on a “shaky gravel road”. The Angolan government started to build a road connecting the forgotten land to the north, they built huge bridges all to be deserted and now slowly decaying.

We head for the Klofie, a small dry river mouthing into the ocean. 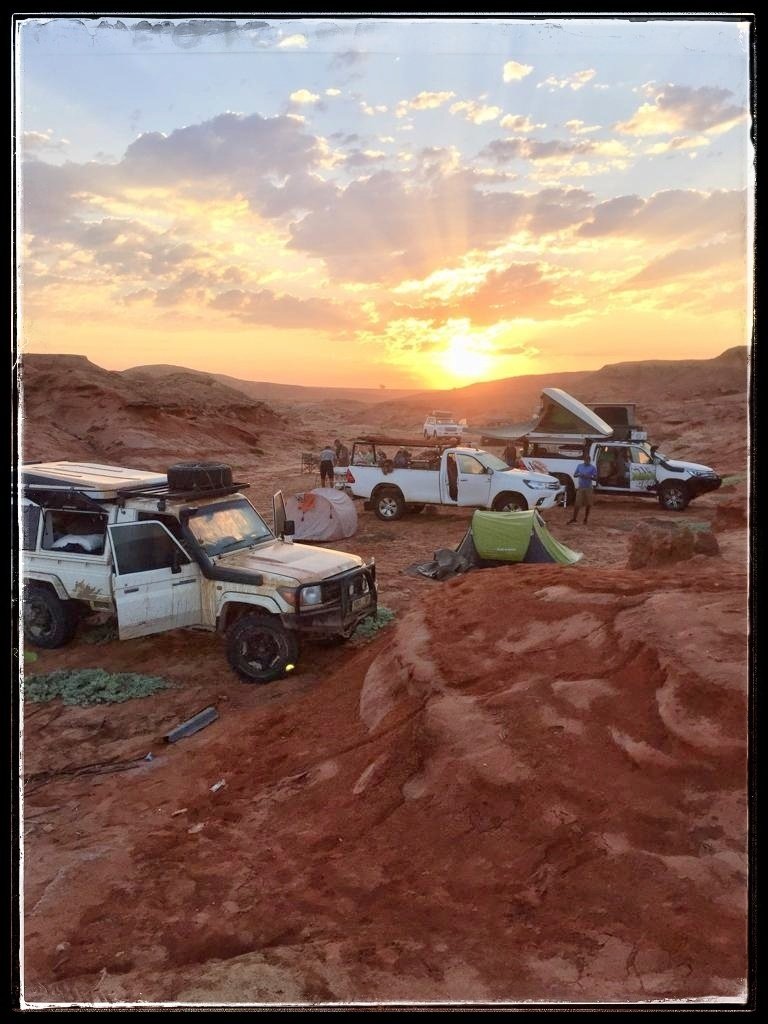 Making way to Namibe, founded in 1842 and until 1985 had the name of Mocamedes. Namibe has the third largest port in Angola, after Luanda and Lobito. It is also the terminus of the Namibe Railway. The town has a gigantic market where you can buy nearly anything, and we will have the opportunity to spend some time shopping here.

Our journey to the border begins when we head to Lubango, driving via the spectacular Leba Pass with its awesome hairpin bends and waterfalls. The road rises from the coastal plain to an altitude of over 6 000 feet in just a few kilometers.

Humpata is 20 km from Lubango. It has a strong South African connection as it was here where the Thirstland Trekkers settled in 1881. The Monumento do Christo Rei keeps a watchful eye over the city of Lubango. The white marble statue is 30 meters high and situated on a hill near the city. The statue is a smaller version of the one in Rio de Janeiro and Lisbon. 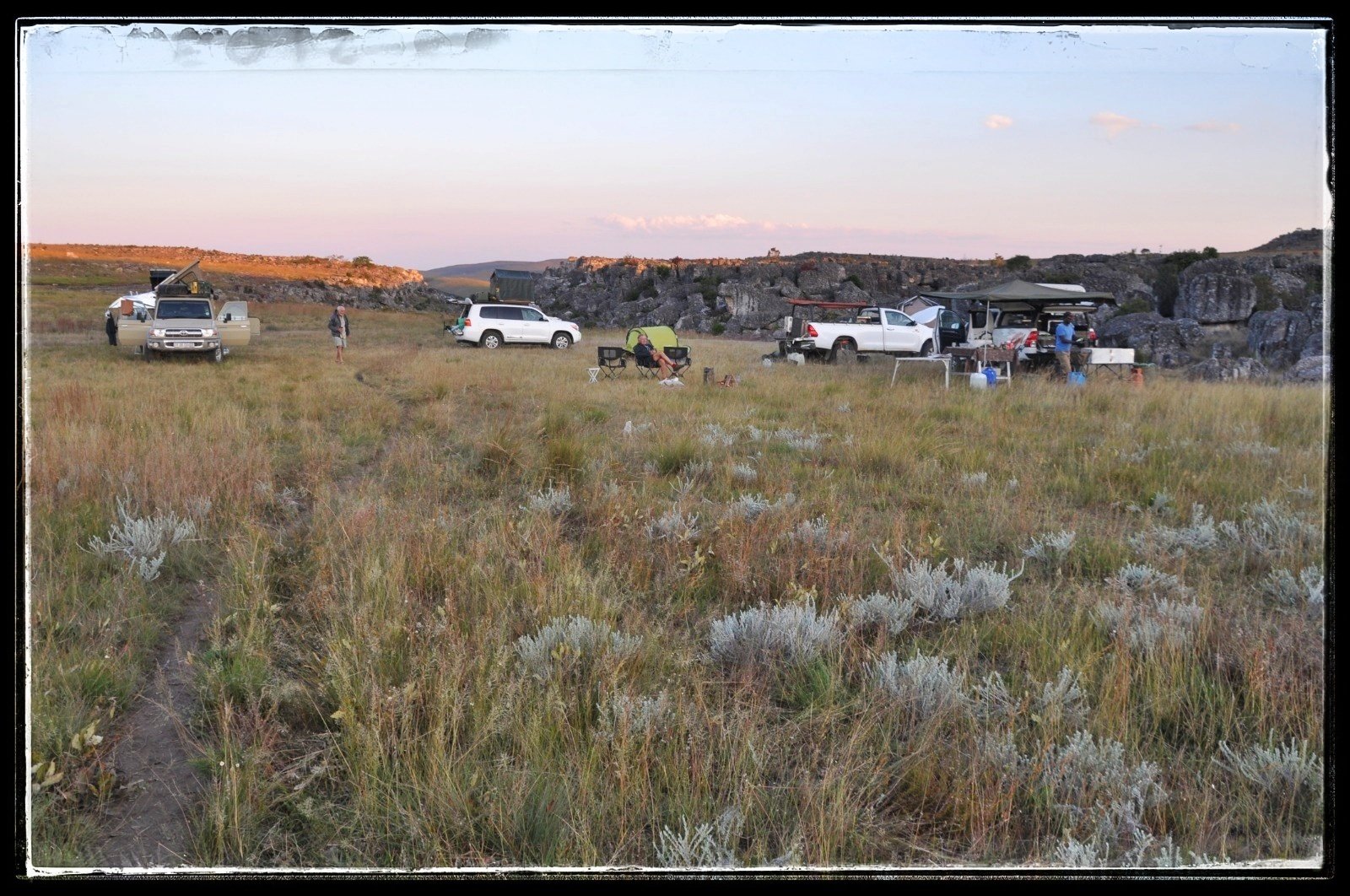 Last day of the tour as we make our way back to Namibia. Early morning departure after coffee and rusks. The road is good, but it takes a long time to get there. We pass through Xangongo making way for the Oshikango border where we will enter Namibia. Our last fuel stop will be just in front of the border where you can fill up your tanks with fuel and spend your last Kwanzas.

NOTE: Please don’t plan to drive to far after passing into Namibia. You won’t make Etosha. Its recommended to book yourself into Palmeira Lodge for the evening and proceed the next day.

This tour is trailer friendly.

We charge no single supplement on this tour.

For any other dates please send us an email.

Experienced guides with own vehicles.

Camping and dinner at Kaisosi on arrival in Rundu.

All camping equipment in and around kitchen set-up.

Yellow fever certificates. If you can't take yellow fever let your GP just give you a note.

Border costs. You will need R500 for cross-border charges.

Any accommodation upgrades or changes to the tour plan.

It is very important that everyone carries enough fuel – Most of the driving is on bad roads. Your vehicle must have at least a 1000km range, in normal circumstances. Please do your own calculation, as you know your own vehicle best.

Costs are based on current government taxes and regulations, should this change we will have to adjust the tour cost accordingly.

Please ensure that you have sufficient medical and travel insurance, very important.

The Angola visa application process can sometimes be nerve wrecking. The application is online. You will need supporting documentation which we will supply you with.

Valid passport or Visa – minimum of four (4) copies for driver and passengers.

Copy of vehicle registration papers. Make a copy of the one where you cut the disc out as this shows the number plate of your vehicle.

Yellow fever certificate for everyone travelling.

COVID PCR test not older than 72 hours. (We arrange for the testing).

Money and payment in Angola:

Debit and credit cards do work at some stores but can’t be guaranteed, so rather pack some cash, especially for your fuel. Petrol cards don’t work in Angola.

For further detail please don’t hesitate to contact us.